NERD NITE SEPTEMBER: A MARRIAGE OF SCIENCE AND ART

Last month, Nerd Nite Boston gathered Boston’s nerds to hear some stories inspired by art, science, technology, lightning, and dystopic visions of invasive social networks. At the Middlesex Lounge in Cambridge, with nerds crowded around low tables, it appeared the husband and wife duo, Alberta Chu and Murray Robinson, were presenting to a group of eager kindergarteners, all of whom wanted to grow up to be scientists (though in reality, most of the audience probably already had). In case you missed it, here are some highlights: 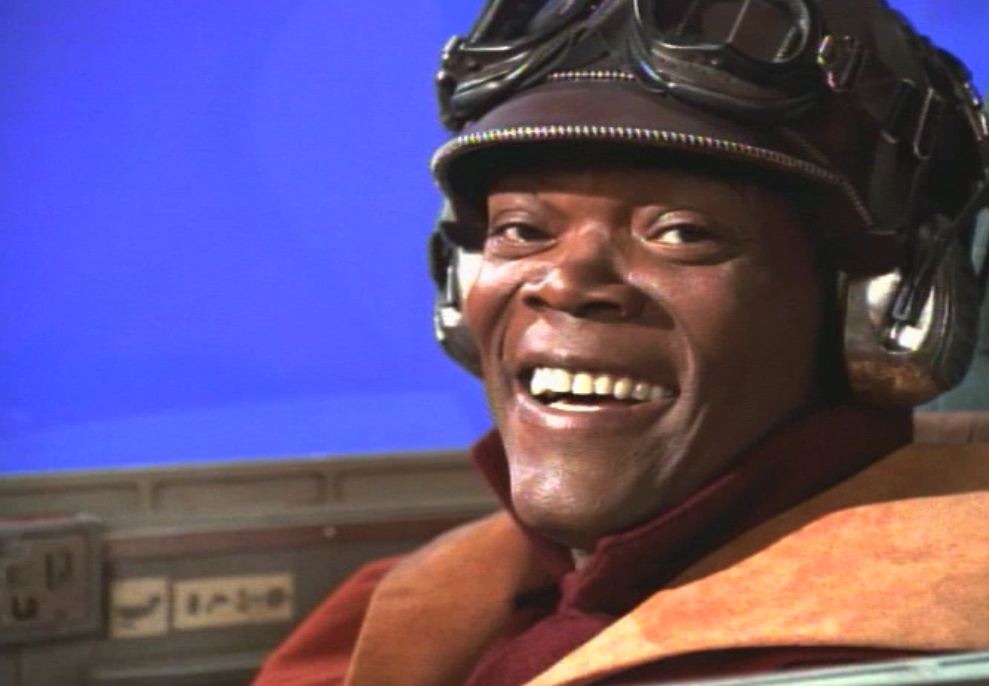 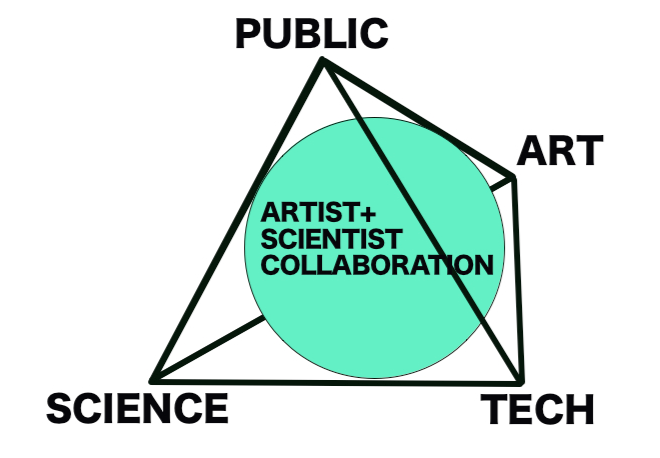 Alberta started by explaining how she has forged her career in science and documentaries, showing us some great clips from her broad body of work. This included a clip of Samuel L Jackson narrating a doc on Industrial Light and Magic’s development of special effects for the Star Wars films. The clip went down pretty well, with audience respondents chanting Mr Jackson’s name and laughing at the corny, tongue-in-cheek intro. It also, of course, included some beautiful footage of massive sculptures on Gibbs’ Farm in New Zealand, which also gathered praise from the audience. The work on sci-fi shows and the engineering of big sculpture has allowed Alberta to have exciting premieres of her work and to build her expertise as a filmmaker, enabling her to pursue making films about the intersection of science and art.

The rest of Alberta’s talk featured several possible outcomes of science and art collaborations, like new science, new art, new technology, and public engagement. Alberta is fascinated with the kinds of hybrid science, art, and technologies that emerge from these collaborations, but places her own work in the final grouping, in that she creates art (films) which enable and/or enhance public engagement in science, art, and technology. Alberta’s slideshow reviewed the broad world history of science and art collaborations, including local heroes Doc Edgerton, Synergy Exhibits, Felice Frankel, as well as international technoartists and organizations: SymbioticA, Natalie Jeremijenko, Heather Dewey-Hagborg, the Exploratorium, and more. Ultimately, she argued, artists can help scientists address contemporary big issues, and can help bring science to the public in ways that make the science relevant and immediate. 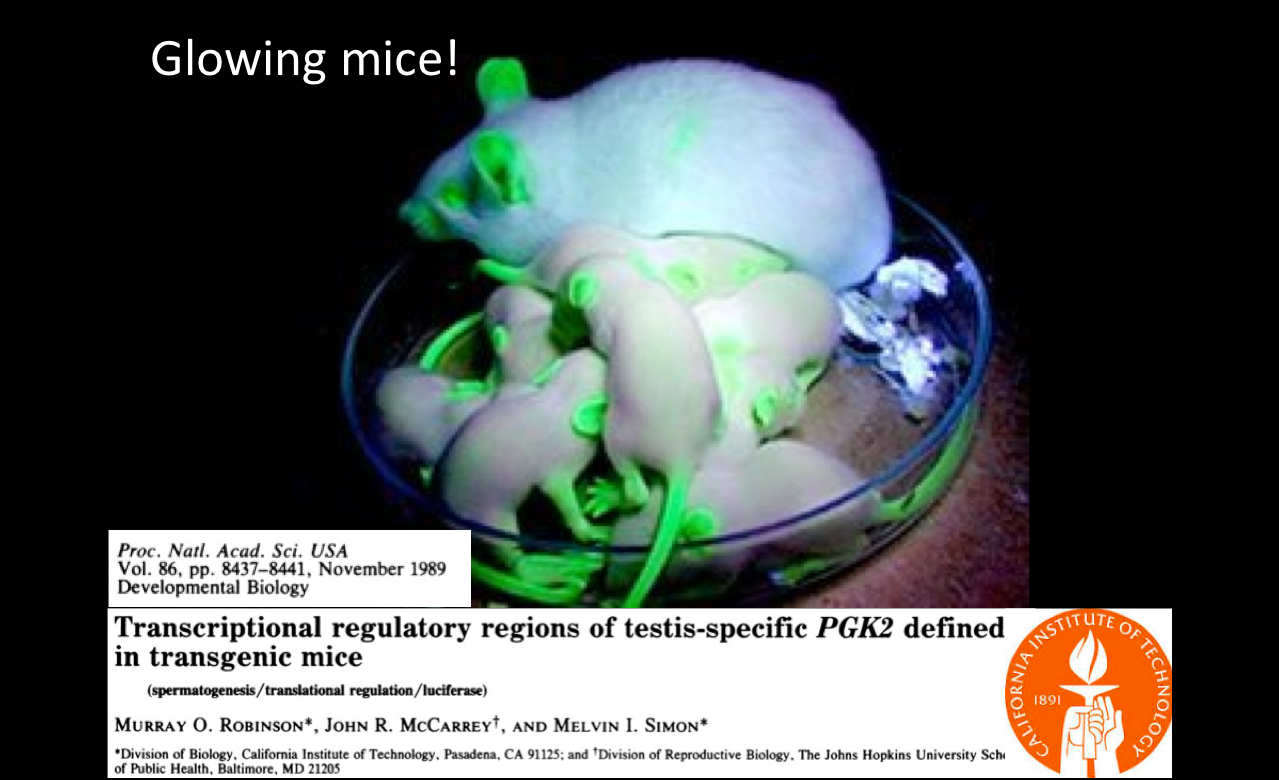 Murray has been working on genes for nearly 30 years. He started out in the 1980s transferring lightning bug genes into mice to see what happened - resulting in glowing mice! Later, Murray met artist Eduardo Kac through Alberta, and his genetic work with mice inspired Kac’s later work in creating Alba, a glowing rabbit. The media maelstrom around this particular work and the process of genetic mutation seems to have died down considerably in the 13 years following Kac’s Alba, Murray argued, as glowing fish are now available as pets without any huge reaction. Over time, as the science has grown into shocking art and then into mainstream culture, the new technologies have been accepted and are no longer as shocking. Murray extended this pattern to hypothesize that the same would one day be true about public reaction toward the huge technological advance of genomics. The first human genome was sequenced less than 15 years ago, but the drop in cost for this process is phenomenal, and means that there is likely to be a sea change in how we understand ourselves in the next decade (at least). Companies like 23andme are giving consumers access to limited genetic information about themselves for as little as $99, and though the amount of data promised seems like a lot, it actually shows how little we really know about what genes are linked to. We know some things, like some diseases, some facial features, etc. Murray discusses two aspects of gene-linked traits: the controversial behavioral links, and the much less controversial idea of facial features linked to specific genes. 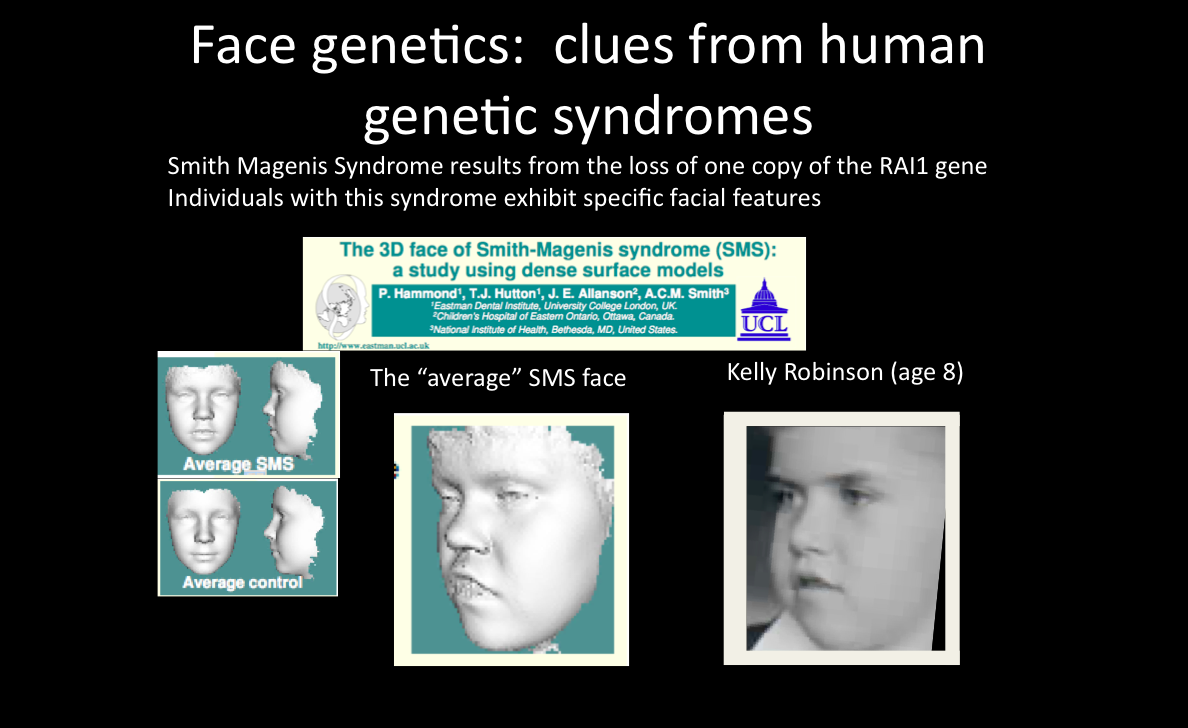 One of the reasons Murray became interested in genetics is because of his brother Kelly. Kelly is an enigmatic figure who is fascinated with electronics, funny, engaging, sleeps funny hours, and developmentally delayed. It wasn’t until 1998 that he was diagnosed with Smith-Magenis Syndrome, which was associated with the loss of one gene, RAI1. The diagnostic features of this gene-linked syndrome, however, included behavioral traits like a fascination with electronics. There are other genetically-linked syndromes with behavioral diagnostic elements. This is fascinating and highly controversial, given that electronics are such a recent and culturally contingent part of society, along with the nature vs nurture debates which rage among scientists and social scientists. Murray also provided two other syndromes which have associated behavioral traits. Aside from behavior, these genetic syndromes are also linked to characteristic facial features, which, again, is less controversial in terms of social narratives about genetics. 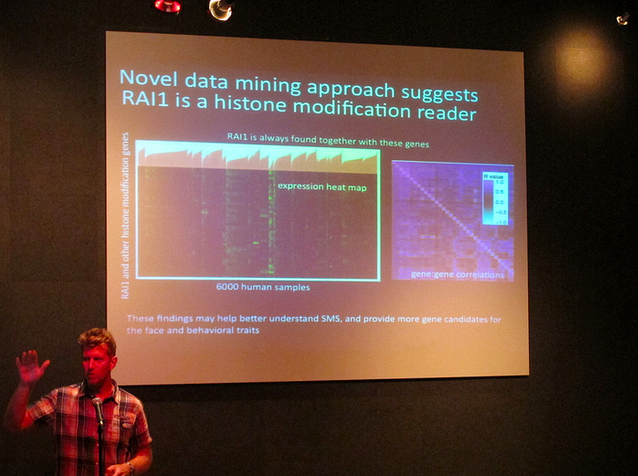 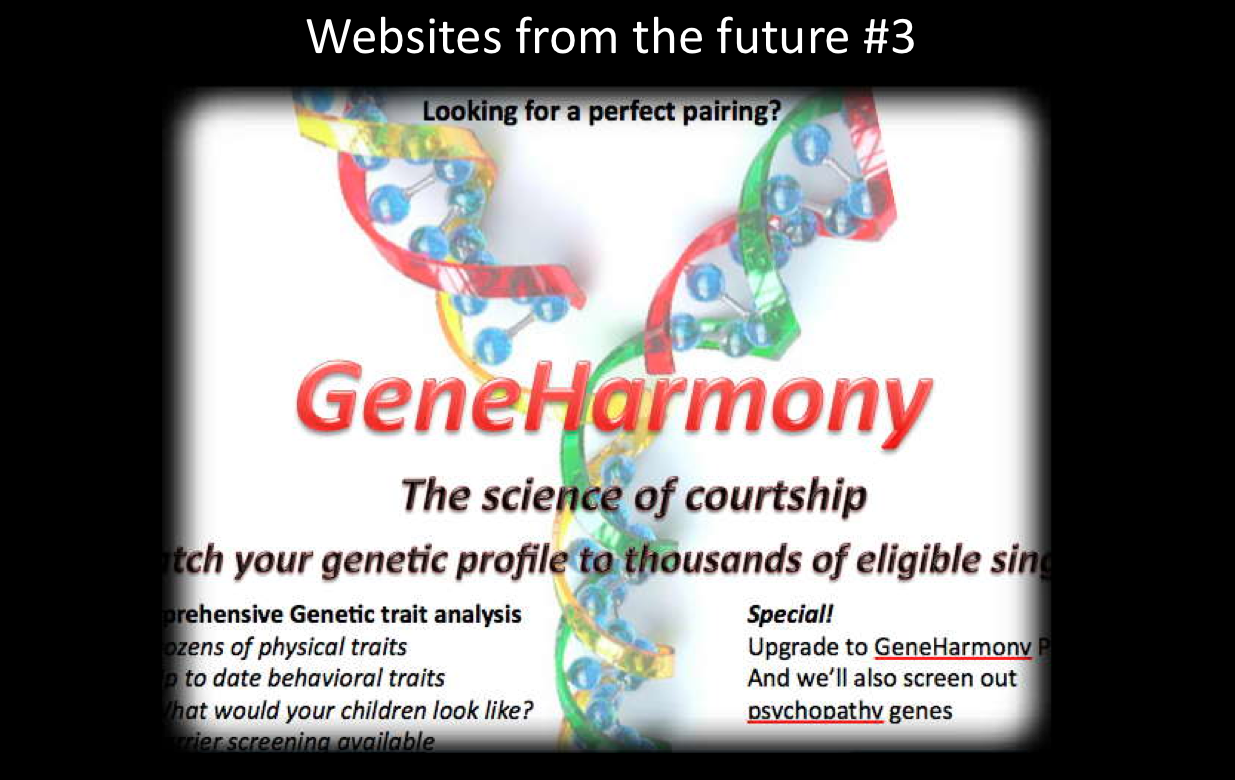 But given the huge amount of data flooding in, and the growing number of scientists and organizations working to begin interpreting that data, what will the future hold? When we do know more about our genetic data, how will we use it? Murray presented a few examples of capitalist/consumer-driven dystopian possibilities, and concluded that the issues and implications underlying this new explosion in genomics needs to be widely discussed and understood.

Both Alberta and Murray definitely agreed on a few key points - science needs to be talked about. The public needs to be in on the conversation. That’s the key importance of science and art collaboration and communication - to bring the science and the public together, to make science and technology accessible, interesting, and relevant to everyone.

Thanks to Mary and Tim and all the folks at Middlesex Lounge! A huge thanks to all who attended! And here’s the #storify of Nerd Nite September capturing the social media around the event. Special thanks to Paul Ha, Hargo, Mark Zastrow, Snarky, Jarrett, Derya, Elena, Doreen, Alex and Max for the social media love.